The mystery library that has wowed the internet 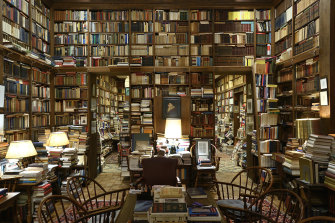 New York: On the first Tuesday of the year, author and political activist Don Winslow tweeted a photograph of an avid reader’s dream library. Bathed in the buttery glow of three table lamps, almost every surface of the room is covered with books. There are books on the tables, books stacked on mahogany ladders, and books atop still more books lining the shelves of the room. “I hope you see the beauty in this that I do,” Winslow wrote in the tweet, which has been acknowledged with 32,800 hearts.

If you spend enough time in the literary corners of Twitter, this image may look familiar. It rises again just about annually, and the library has been attributed over the years to authors including Umberto Eco and buildings in Italy and Prague. As with other images featuring beautiful bookshelves, people go absolutely bananas for it. Winslow’s post received 1700 comments, including one from a professor at Pace University who has been using the photo as his Zoom background.

“It’s clearly the home of a person who loves and collects books,” Winslow said in an email through his agent, Shane Salerno. “For me, I think that photo is as stunning as a sunset. I could spend days and days locked in that library examining each book.” He noted that there’s something comforting about the image, since “it’s a room you could happily get lost in”.

Winslow had no idea the origin of the photo. He had found it on Twitter, but didn’t remember the name or location of the library. (Though he believed it to be the personal library of a prominent author from another country.)

The library, it should be known, is not in Europe. It doesn’t even exist anymore. But when it did, it was the home library of Johns Hopkins professor Richard Macksey in Baltimore. (I was his student in 2015 and interviewed him for Literary Hub in 2018.) Macksey, who died in 2019, was a book collector, polyglot and scholar of comparative literature. At Hopkins, he founded one of the country’s first interdisciplinary academic departments and organised the 1966 conference “The Languages of Criticism and the Sciences of Man,” which included the first stateside lectures by French theorists Jacques Derrida, Roland Barthes, Jacques Lacan and Paul de Man.

Judicious selection or riotous shopping trips? The story of libraries

Macksey’s book collection clocked in at 51,000 titles, according to his son, Alan, excluding magazines and other ephemera. A decade ago, the most valuable pieces – including first editions of Moby Dick, T.S. Eliot’s Prufrock and Other Observations, and works by Wordsworth, Keats and Shelley – were moved to a “special collections” room on the Hopkins campus. After Macksey’s death, a SWAT team-like group of librarians and conservationists spent three weeks combing through his book-filled, 690 square metre house to select 35,000 volumes to add to the university’s libraries.

Surprise discoveries included an 18th-century Rousseau text with charred covers (found in the kitchen), a “pristine” copy of a rare 1950s exhibition catalogue showing Wassily Kandinsky’s paintings, posters from the May 1968 protests when students in Paris occupied the Sorbonne, a hand-drawn Christmas card from filmmaker John Waters, and the original recordings of the theorists at that 1966 structuralism conference.

“For years, everyone had said ‘there’s got to be recordings of those lectures.’ Well, we finally found the recordings of those lectures. They were hidden in a cabinet behind a bookshelf behind a couch,” said Liz Mengel, associate director of collections and academic services for the Sheridan Libraries at Johns Hopkins. Several first editions by 20th-century poets and novelists sat on a shelf in the laundry room.

After the librarians from Hopkins and nearby Loyola Notre Dame were finished selecting their donations, the remaining books were carted away by a dealer, so Macksey’s son could prepare the house to be sold.

The library image sidesteps all those details to evoke something more universal, said Ingrid Fetell Lee, the author of the Aesthetics of Joy, a blog about the relationship between decor and delight. “We’re attracted to the image, and we come up with all sorts of stories about who it might be and what it might be because we love to tell stories,” she said. “But what’s really driving the attraction is much more visceral.”

Fetell Lee pointed to the photo’s sense of abundance. “There’s something about the sensorial abundance of seeing lots of something that gives us a little thrill,” she said. Also relevant: the “satisfying” sense of organised chaos, and the awe inspired by the high ceilings.

Pictures of books and libraries are popular across social platforms. A representative from Instagram said that some of the top-liked posts on the platform that include the words “library” or “libraries” feature large quantities of books, a “cozy” aesthetic or a warmer colour scheme.

What would Macksey think if he knew his library had taken on a life of its own? “My dad liked nothing better than sharing his love of books and literature with others,” Alan Macksey said. “He’d be delighted that his library lives on through this photo.”

This article originally appeared in The New York Times.