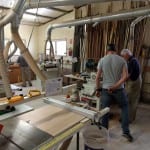 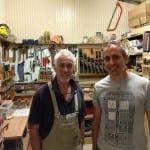 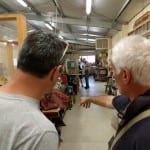 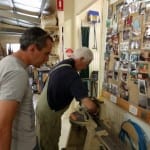 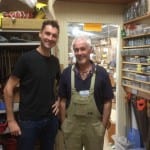 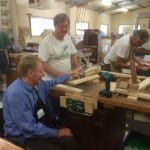 Dan and I headed out to see the good folks at the Mens Shed Ku-ring-gai who have offered to make a few libraries for us.

If you’ve never been to a mens shed before, you’re in for an experience. I wanted to retire immediately and start playing around with tools and such.

The Men’s Shed movement has some great aims which we support.

The Shed holds an important place in Australian culture. It can be a reservoir of memories, experiences, a place to share skills and to socialise. We’ve all read reports which tell us that good health is based on many factors including self esteem, feeling productive and valuable to society, having social relationships and being active.

Many retired people have had to downsize their living arrangements, often resulting in their personal space, usually the garden shed or workshop, being lost.

So the idea of a Community Workshop was born. Here you can come and share a fantastic variety of tools and equipment, still pursue their interests in pastimes and hobbies, spend time with others of similar interests, learn new skills or use tools for the first time – or keep old skills honed and productive.

We’ll be featuring these Street Libraries on the site just as soon as they’re built – we’re expecting some excellent woodwork, and probably quite a bit of banter from the (mostly, but not all) old blokes.